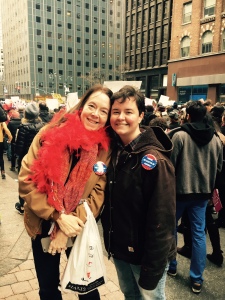 Me with my daughter on 42nd Street amidst the throng.

Standing in line to get some food at Grand Central at the end of the day, my daughter, a friend, and I stood chatting. A man in a Metro North conductor’s uniform stood near us. He turned a few times to look at us, and finally spoke. “I don’t mean to be forward, but I wanted to say something to you.” We were listening, unsure what would come next. “I haven’t been doing so well since the election. And today, seeing all the people pouring onto my train to come here to join the march, is the first time since that day that I have felt calm. I want to thank you.”

The estimates vary a bit but it looks like at least 500,000 men and women marched in New York City on Saturday, January 21, 2017 in response to the inauguration of Donald Trump. The purpose was simple enough: to let the new administration know we are here, we will be heard, and that human rights are not to be abrogated, dismissed, or flicked away because they interfere with one man’s fascist agenda. Well, one man plus a lot of other men who see Trump’s ascendancy as their chance to solidify their privilege once and for all. Fat chance.

A group of friends who either went together or found one another.

If you have a pulse and are awake at least an hour or two out of every 24, you probably know that over 600 marches worldwide pulled in upwards of three million participants. All of them were peaceful. What I tuned into while I walked (and often stood still in pause-mode, pressed up against the patient thousands in my immediate vicinity) were: love, empowerment, solidarity, optimism, some fear and anger at what is transpiring in this country at the expense of the majority, but most of all a spirit of activism that is unlike anything I’ve ever seen. Even the protests against Vietnam, the Civil Rights marches, the Million Man March (1995), and other major peaceful protests have not approached the numbers that turned out this time (around the planet).

As far as the eye can see.

Thousands of men marched alongside their sisters, wives, daughters, mothers. There were people of every color and all ages. From toddlers on shoulders to teens, the kids who participated were learning the lesson of peaceful activism from their parents—such a valuable lesson to learn by doing. White-haired grandparents, men and women in wheelchairs, straights, gays, transgender, first time marchers, veteran marchers, breastfeeding moms, dads wearing pink pussy hats—so many human beings with common purpose.

I marched with my alma mater.

People are realizing that every voice does matter. People who voted for Hillary, and people who did not vote at all, and even some who voted for Trump, are coming together to take a stand against the rich and entitled skewering the rest of us. Take a stand for affordable healthcare for all. For public education. For the environment and the future of our planet. For the rights of women. For the rights of immigrants. For #BlackLivesMatter. For the future of this entire country, not simply the privileged.

There is a phrase in the song “America the Beautiful” that goes like this: “crown thy good with brotherhood.” (Sometimes when I sing it, the word “motherhood” slips out instead.) But what I want to say is this: for centuries, the concept of brotherhood has been accepted as a catch-all to refer to solidarity among people of all genders. The male pronouns and nouns have reigned. Yesterday, a spirit of sisterhood infused the marches worldwide. The men who participated did so joyfully in that spirit of sisterhood. Josh Bauman, a young cousin of mine, wrote this on his Facebook wall: “As today has proven in overwhelming numbers, we are stronger together and we will stand against those trying to tear us apart. And, appropriately, it is WOMEN leading the way.” 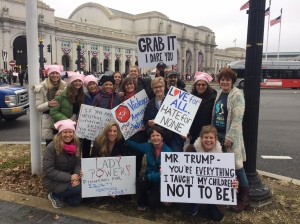 Some friends and colleagues of mine in D.C. with their posse.

Women are indeed the future of this planet, simply because to continue to marginalize them and the issues they embrace is to alienate 51% of the humans on Earth. The needs, wishes, and agendas of only men will not serve the future. Pretending that a pussy-grabbing, climate-change-denying, racist one-percenter in the pocket of Vladimir Putin is a legitimate and worthy person to lead us into the future is pointless, a distraction, and a very dangerous thing to do. The Trump Zone of “alternative facts” is a parallel universe of lies and hatred that more than 3 million people rejected on Saturday.

Love, assertiveness, and empowerment are far from being mutually exclusive. They strengthen each other and those who embrace them. #whywemarch #womensmarch #resisttrump #pussygrabsback #dissentispatriotic

If you know what that means, I’d probably like you. If you consider yourself to be sapiosexual, I might even love you. And if you’re a guy, I’d date you.

I didn’t know what sapiosexual meant until a while back when I saw a man describe himself that way on his dating profile. Excited to find a word I had not heard before, I was immediately hooked. I was pretty sure I knew kinda what it meant. Sapio—from the Latin verb “sapere” (dare to be wise) from which we (however accurately) derived sapiens, the second half of homo sapiens. Aka animals with thinking brains. (Yes, this is super species-centric and assumes we are the only ones with thinking brains [in itself a profoundly stupid assumption], and a case could be made that we might actually not be that smart after all, if you look at it a certain way [aka the fate of our planet and all the creatures upon it], but regardless, sapiens basically means smart.)

The Urban Dictionary tells us that “a sapiosexual person is someone who finds intelligence and the human mind to be the most sexually attractive feature in the opposite sex” (or same sex if you are gay). Glory be!

I am automatically going to swipe right for any man who says he’s a sapiosexual. Why? Because I grew up in a world that tries to convince women and girls that their brains are 1. Not that important 2. Probably not as good as those of the dudes 3. Something to downplay on a date and I could go on. All of which is 1. Wrong 2. Sexist 3. Likely to be the end of civilization as we know it if we stick with those made-up, ridiculous rules. I love the men who love my brain, because to me they are 1. Confident 2. Smart 3. Fun to be with. Oh, and yeah, 4. Sexy as hell. (And also probably not afraid to admit they are feminists, and in case you need a reminder that means they believe that men and women deserve equal rights and treatment. Not that radical.)

Smart IS sexy. It just plain is sexy, sexy, sexy. I’m not going to want to rub up against someone I can’t talk with. Deeply. I mean, whatever your thing is, it doesn’t matter: quantum physics, mechanical engineering, 17th century poetry, neuroscience, international politics, Cajun cooking, the history of fashion design, ornithology—I’m interested in it if you are, and I want you to be interested in my stuff too. I mean, why not learn something while you cuddle in front of the fire in the ski lodge, lie naked under the ceiling fan after a day on the beach, or sip yummy wine at a sexy little hole-in-the wall in the West Village.

Part of attraction/love/desire is being excited, right? If I’m excited about a book I just read or an idea I just had, it’s going to light me UP, and make me desirable and sexy. If you are turned on by your work, your art, your ideas, that thrill you feel will make its way to me and I’ll get… turned on too. See how that works?

Be the sapiosexual you want to see in the world. If you want to be fulfilled in the long term, don’t hide your brilliant fire under a bushel to get a date. If you do, you’ll be stuck pretending to be somewhat dim for the duration, and you’ll bore quickly or resent the person who liked you in spite of being, well, dim.

The deepest loves (and sexiest) I’ve had have been the ones where something—a circumstance of one kind or another—allowed friendship and intimacy to blossom fully before that first sexual moment. The hunger and subsequent thrill that comes on the heels of that slow build-up is indescribable.

Are physical compatibility and attraction important? YES. But honestly, the men on dating sites who say “send me more pictures” or call me “cutie” without knowing a thing about me don’t interest me in the slightest and, in fact, turn me off. The ones who tell me something interesting, and ask to hear what I have to say—they will get me to keep the conversation going, every time.

*This blog also had a guest appearance on the blog of Betty Russel, BeFreeToLove.com. Thanks, Betty!